Early Adoption of FEA Software – How Scepticism Led to an Epiphany! 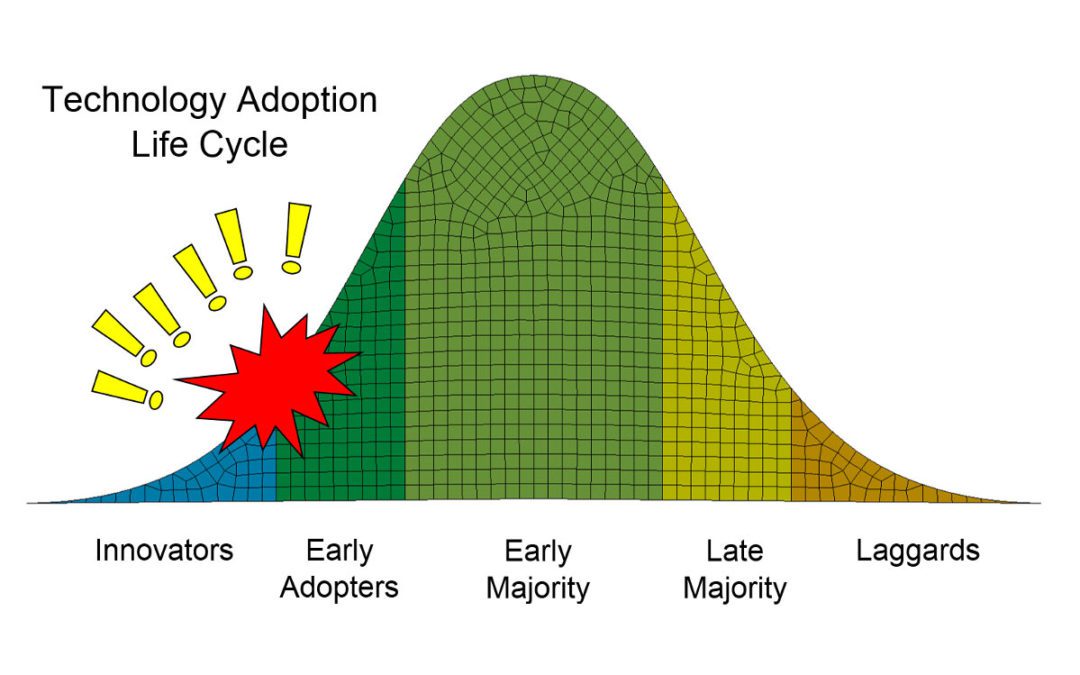 This short article covers Evotech CAE’s background in production-level  FEA software, and how we were sceptical of ‘yet another’ new toolset. However, after some initial testing we realised that this could change the way we, and other companies, could work. It contains 1.5k words and will take 3 minutes to read. For more information on FEA software, our online training program or anything else related, follow this link.

Taking on a new technology and/or technique for most of us can be an exciting proposition. The idea of engaging with something which promises to improve your workflow, save time, and even be more ‘enjoyable’ than your current approach is an attractive proposition, especially in the world of engineering design and simulation. However, for some of us (especially those with greyer hair than most), we’ve heard it all before from the numerous software vendors who promise the earth and end up coming up with a marginally better way of juggling your nodes/mesh/results, compared with your current system which they claim is ready for the trash.

In the last twenty years I’ve been in industry, and directly involved in FEA/CAE, I would estimate being exposed to at least 10 different commercial pre-/post-processors, and probably the same number of solvers, not to mention individual product releases. While most of these follow the same workflow (build, solve, post-process and repeat), each vendor would have us believe that their system is the best/fastest/easiest to learn/most prevalent in industry etc. With most of my career spent in the aerospace industry, this list has been whittled down to a choice of two or three pre-/post-processors (usually determined by the client and their in-house processes) and a couple of solvers (based on the certification authority or ‘Tier 0’ air-framer). The proliferation of a contract-based workforce means that it pays dividends to be up to speed with industry trends, whilst keeping an eye out for the new kid on the block. This was true, I was a genuine, paid-up sceptic when I was first exposed to the latest rendition of FEA software ‘greatness’ (I’ll hold onto the name for now – let’s just call it Software ‘X’ [1]).

We were happily developing a major aircraft structure for a client [2] (well, ‘happily’ is subjective – we were ploughing along using client-specified, outdated, legacy tools [3] and methods for FEA model build, analysis and structural optimisation, usually in a high-pressured environment where there just wasn’t the time to consider new technology or process improvements). The only concession to getting an already pressured job done ahead of time was for the client to throw more people at it. The client had a manpower resource base that extended to five sites across four continents. Lucky old me was the FEA model integrator when the sub-assemblies arrived from the respective build teams, responsible for both up-front specification and ensuring that the delivered data could be assembled and verified into a working representation. The ability to balance the needs of a high-level analysis task whilst working with a non-specialist project management team that had no concept of the technical challenges we faced was not for the feint-hearted.

And then it began – I didn’t realise it, but I was about to have an FEA epiphany…

I’d heard of Software ‘X’ via some industry forums I’d subscribed to. This was backed up when we were visited by a US-based industrial partner who’d had some early exposure through a Beta development program at their aerospace company. After watching an early development webinar (on my smartphone!), I had my interest pricked by some of the claims that were being made (“>10x efficiency gain”, “become productive in a couple of days”, “verify models on the fly near real time” etc etc). I’d heard this kind of thing before, but these new claims were so ‘out there’ I knew it was something I had to look at.

We got hold of a trial install at the client site, and I started to ‘play’ with Software ‘X’ during lunch breaks and after hours. I started to realise that there was something in this tool, although I wasn’t sold by any means. After five minutes here and there (I normally like to eat at lunch time), I was beginning to get the hang of the interface, and thought I’d try it out with some production data. Before I knew it, I had gone from CAD geometry to a fully-verified FEA model representation, without even realising it. Lo and behold, the “become productive in a couple of days” statement was true! And this was all done on my own using the embedded help system, with no external knowledge or experience.

I convinced one of the project management ‘bean counters’ to spare me a few hours to look at a ‘live’ task using Software ‘X’. This was a complex model build that had previously taken upwards of 4 engineers at least one month for a legacy incarnation (over 700 man-hours). After several initial efficiency measures (and some potential, then demonstrated productivity gains) I was given 60 hours to attempt the full job. To my own and many other people’s amazement, I completed the task in 40 hours (including verification to the air-framers stringent checks), approximately 6% of the original time – the “become productive in a couple of days”, “verify models on the fly near real time” statements were also true!

Once the shock had subsided, several of my colleagues took to using Software ‘X’, in an attempt to replicate the efficiency gains I had demonstrated. Sure, no toolset can replace years of solid engineering analysis knowledge and judgement, but after we scoped out some basic parameters, even fresh graduate engineers with very little FEA experience were able to rapidly generate production-ready output. This simply would not have been possible with the client-specified legacy toolsets.

Back to the Future…

Moving on from them to now, we at Evotech CAE Ltd, are fully embroiled in using Software ‘X’ as a major part of our client delivery, allowing us to compete for analysis and development work to both a cost and time schedule that simply wouldn’t have been possible using the ‘old guard’ in terms of FEA software. Following on from simply using Software ‘X’, we are now an ‘Elite Partner’, offering technical sales and dedicated training in the technology, and are currently developing on online/on-demand training platform, making training available to everyone.

When we speak to engineers and analysts about Software ‘X’, many of the same questions arise, and the conversation becomes a straight-forward list of ‘pros and cons’. Many of the ‘pros’ are covered above (in terms of technical capability, efficiency and learning curve), but it’s the ‘cons’ that get interesting, especially for early adoption of a technology which is new to the FEA/CAE market.

“We spend enough on FEA Software! Why would we want to spend more?”

The efficiency gains available when using Software ‘X’ can save hundreds, if not thousands, of man-hours across your organisation. Software ‘X’ can be licensed using low-cost flexible licenses, allowing access to multiple users. The cost of Software ‘X’ will be quickly covered by the time savings you’ll get.

“Our engineers are not experienced in Software ‘X’! We can’t afford the time/cost to re-train them!”

Software ‘X’ can be ‘self-taught’ using the embedded and context-sensitive help (where every function is covered by its own short video) and simple tutorials. We are currently in the process of developing a series of online/on-demand courses, which will allow new and experienced users to become power users in a fraction of the time seen for legacy FEA software.

“We must use an FEA product determined by the industry, or our client base!”

Sure, this is a real concern for production FEA work. You need to deliver work in a fixed format (whether that’s electronic or report-based data). Ok, this might not be Software ‘X’, but we’ve got you covered – the bulk of the pinch-points in the FEA process, such as ‘CAD to mesh’ and certainly model verification can be ‘outsourced’ to Software ‘X’. CAD and FEA data translators using the most widely used deck formats are available to allow Software ‘X’ to be used in ‘companion’ mode. Put simply, use Software ‘X’ to do the laborious ‘grunt’ work for build and verification, then import into your pre-processor or solver environment of choice for solver-specific tasks such as analysis set-up and post-processing.

“Nobody has heard of Software ‘X’! We can’t risk being too radical with our software choice – we’re not early adopters!”

Software ‘X’ is developed by one of, if not the biggest, companies dedicated to simulation technology. Software ‘X’ is growing rapidly, both in terms of technical advancement (underpinned by the most widely used and respected solution architecture in the industry) and user base. Software ‘X’ is here to stay and will become the most widespread FEA toolset used in industry – we’re pretty sure of it!

While Software ‘X’ has allowed incredible efficiency gains to be made, this article is not intended to simply list out the technological developments (some of them patented by the developer), but more a means of describing our route to here. If you are interested in seeing what is achievable, then I’d suggest looking at a Free Trial and the Case Studies/Tutorials we’ve developed.

[1] By the way, Software ‘X’ is really known as MSC Apex, but you probably already knew that. If you didn’t I’d suggest taking a look – it will change your FEA life!!
[2] The names have been changed to protect the innocent!
[3] Obviously, it would be unprofessional of me to mention legacy products directly, so for simplicity and law-suit avoidance (!), let’s just refer to the range of legacy commercial pre-/post-processors as ‘A’, ‘F’, ‘H’ and ‘P’, and the solvers as ‘A’, ‘A’ and ‘N’!